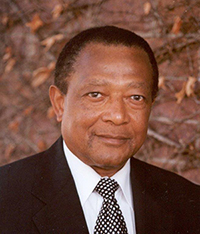 Dr. Richard Allen Williams, the Founder and President of the Minority Health Institute, 117th President of the National Medical Association and Founder of the Association of Black Cardiologists, is a cum laude honors graduate of Harvard University. He attended the State University of New York Downstate Medical Center where he received the M.D. degree. He later performed a Cardiology fellowship at Brigham and Women’s Hospital and Harvard Medical School. In 1972, he became Assistant Medical Director at the new Dr. Martin Luther King, Jr. Hospital where he secured a $3 million dollar grant to establish the King-Drew Sickle Cell Center, of which he became the Director. Later, he moved to the West Los Angeles VA Medical Center and became Chief of the Heart Station and Head of the Cardiology Department. At present he is Clinical Professor of Medicine at the UCLA School of Medicine (full Professor) and was the first African American to achieve that status in the UCLA Department of Medicine. He also received a Lifetime Achievement Award from Harvard Medical School. In addition, he was privileged to present a scientific paper at the Oxford Round Table.

Dr. Williams is considered an international expert on hypertension, healthcare disparities, dyslipidemia, diabetes, obesity, heart failure, and sudden cardiac death.  He was recently honored by the American Heart Association from which he received the prestigious LifeSaver Award. He has also received the Scroll of Merit and Distinguished Leadership Award from the National Medical Association, their highest honor.

He has authored eight books, numerous book chapters, several scholarly articles, and dozens of scientific papers. He wrote the ground-breaking Textbook of Black-Related Diseases (McGraw-Hill) in 1974 and the critically acclaimed Healthcare Disparities at the Crossroads of Healthcare Reform (Springer, 2011). His ninth book, Blacks in Medicine: Clinical, Demographic, and Socioeconomic Correlations (Springer) is in progress.

Dr. Williams has a legacy of community service including serving on the CDU Board of Directors, the Board of Directors of the American Heart Association, the Advisory Board of the Community Health Councils, and the California Jazz Foundation. He has also shown his philanthropic side by participating in National Medical Fellowships and by establishing three separate scholarship funds in his name to benefit African American medical students across the country.

We use cookies on our website to give you the most relevant experience by remembering your preferences and repeat visits. By clicking “Accept All”, you consent to the use of ALL the cookies. However, you may visit "Cookie Settings" to provide a controlled consent.
Cookie SettingsAccept All
Manage consent

This website uses cookies to improve your experience while you navigate through the website. Out of these, the cookies that are categorized as necessary are stored on your browser as they are essential for the working of basic functionalities of the website. We also use third-party cookies that help us analyze and understand how you use this website. These cookies will be stored in your browser only with your consent. You also have the option to opt-out of these cookies. But opting out of some of these cookies may affect your browsing experience.
Necessary Always Enabled
Necessary cookies are absolutely essential for the website to function properly. These cookies ensure basic functionalities and security features of the website, anonymously.
Functional
Functional cookies help to perform certain functionalities like sharing the content of the website on social media platforms, collect feedbacks, and other third-party features.
Performance
Performance cookies are used to understand and analyze the key performance indexes of the website which helps in delivering a better user experience for the visitors.
Analytics
Analytical cookies are used to understand how visitors interact with the website. These cookies help provide information on metrics the number of visitors, bounce rate, traffic source, etc.
Advertisement
Advertisement cookies are used to provide visitors with relevant ads and marketing campaigns. These cookies track visitors across websites and collect information to provide customized ads.
Others
Other uncategorized cookies are those that are being analyzed and have not been classified into a category as yet.
SAVE & ACCEPT